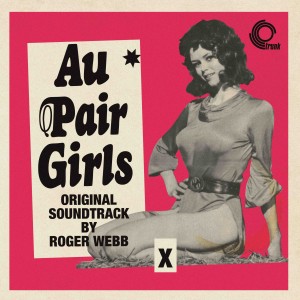 The title of Au Pair Girls suggests it all of course; yes, four young women fly into London from Europe and Asia, are sent to their new employers and find themselves in unexpected and unusual situations pretty fast. There is of course full nudity, crudity and a large slab of cheese on the menu.There is also no real comedy, a sprinkling of infamous character actors (Richard O’Sullivan, John Le Mesurier), and “UFO” actress Gabrielle Drake (sister of Nick Drake) wearing nothing at all. If anything, the film has maintained a vague middle aged male following because of Gabrielle.

But there’s little to save this film from contemporary criticism - its outdated view of life, rights, sex and taste sit uncomfortably today. But the jet set soundtrack by Roger Webb was worth saving.

By 1972 Roger Webb’s career in film and TV music was taking off. He was an established songwriter and live pianist with a jazz trio. He’d already penned a few British scores and was just starting on a formidable future with library companies including Chappell, de Wolfe and Capitol. His route to Au Pair Girls was accidentally through Norman Newell, one of the giants of the post war music industry.Actress and performer Dee / Deanne Shenderry had asked Newell to recommend an artist to arrange her up and coming album. New;ee recommended Roger Webb.The two worked together and some music was produced, but to my knowledge only got to acetate stage (possibly for Apple Records). Dee husband was Kenneth Shipman, a co-owner ofTwickenham film studios.And so when Kenneth Shipman started pre
production of Au Pair Girls, Roger Webb was an easy go-to for film music composition.

Many years ago there was an original reel / master for Au Pair Girls. It was transferred to CD, DAT and cassette circa 1990 and the rapidly degrading tape was subsequently misplaced, lost or just binned. So all we had to work with was a rather shaky transfer from nearly 30 years ago, one which included numerous wobbles as well as speeding up and slowing down moments.The job of rescuing all this was left to Jon Brooks, my hero for all such musical problems. The end result is what you hear on this album. It is by no means sonically perfect but it is all we will ever have.

It’s certainly not Roger Webb’s best ever score (I have more of his ace work coming) but it has a certain charm and relentlessness.The lyrics were written by Norman Newell, and I can imagine the pair having a huge amount of fun putting the score together and recording it, with - as you’d expect - a pretty tight band and lively vocal group.The main theme does, as one reviewer state, “go on a bit”, but there’s enough musically here for me to get excited about and really want to “stick it out”. So I have.