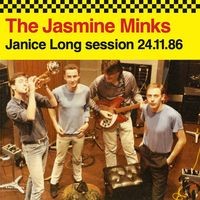 “The Jasmine Minks were the first real Creation band – their single ‘Think!’ was the fourth single we put out. An amazing unknown gem of a band. Working-class heroes – to me, anyway.” Alan McGee

Formed in Aberdeen in 1983, the Jasmine Minks were one of the original artists on Alan McGee’s fledgling Creation label and regulars at the storied Living Room. They recorded several classic singles for the label – among them ‘Think!’, ‘What’s Happening?!’ and ‘Cold Heart’ – plus a number of LPs.

Adam Sanderson had left the band by the time of their second BBC session, this time for Janice Long, with Wattie Duncan joining (and actually getting them the session!) This second outing features early versions of some of Shepherd’s best-known songs, including future favourite ‘Cut Me Deep’ and the soulful ‘Ballad’ (later released as ‘Soul Station’) – plus a rampant version of old single ‘Where The Traffic Goes’.

Follow Me Away
Cut Me Deep
Where The Traffic Goes
Ballad