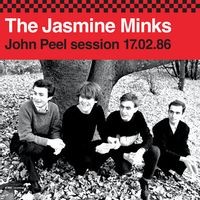 “The Jasmine Minks were the first real Creation band – their single ‘Think!’ was the fourth single we put out. An amazing unknown gem of a band. Working-class heroes – to me, anyway.” Alan McGee

Formed in Aberdeen in 1983, the Jasmine Minks were one of the original artists on Alan McGee’s fledgling Creation label and regulars at the storied Living Room. They recorded several classic singles for the label – among them ‘Think!’, ‘What’s Happening?!’ and ‘Cold Heart’ – plus a number of LPs. These recordings are their only two sessions for the BBC.

This session for the legendary John Peel show, features the band’s original line-up with powerhouse songwriting duo Jim Shepherd and Adam Sanderson; among tracks included are ‘The Ballad of Johnny Eye’ and ‘Cry For A Man’, both favourites with their fans.