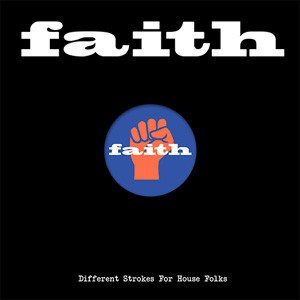 New York City 1976 and D.C. LaRue is dancing at David Mancuso's 'The Loft' party with friends, as they get higher and the atmosphere more intense DC loudly proclaims 'These places are the new cathedrals'. This epiphany sent him straight back to his Manhattan studio where he wrote the seminal Disco anthem that is 'Cathedrals'. A classic that has lasted because of the quality of the song writing and the stunning musicianship.

These mixes (apart from Greg Wilsons Edit) are taken from the original multi tracks that DC and his crew created that hot summer of '76. Maurice Fulton takes a beautifully eccentric leftfield view that drips drama. Chicago's Jamie 3:26 jacks it up chi-style but without ever losing the soulful essence of the track.

Faith's Farley & Jarvis take a different approach choosing to loop the big hooks under some fresh 909 House beats creating what we hope will be a terrace summer anthem. Greg Wilsons edit has been a heads fave for some time but now its remastered on quality vinyl.

Patrick says: As far as disco masterpieces go, "Cathedrals" is fairly fucking celestial, so you'll be delighted to know that each of the producers on this double pack has shown due reverence. Moods range from mirror-ball eleganza, stripped back funk, disco house pump and utter groove-a-thon.