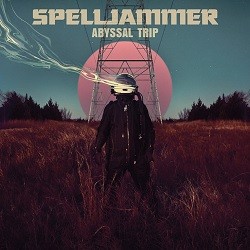 Abyssal Trip (note: carefully re-read that album title) takes its moniker from the perpetually dark, cold, oxygen-free zone at the bottom of the ocean. The 6-song, 44-minute album fittingly embodies that bleak realm with rumbling, oozing guitars intercut with dramatic melodic interludes. The songs take their time to unfurl, making them even more hypnotic. Likewise, the lyrics take a poetic approach to establishing the sonic scenery.

“The lyrical themes we address, like the ultimate doom of man, and the search and longing for new and better worlds, are still there,” Olsson says. “The concept of something undiscovered out there in vast emptiness is pretty much always present.”

The recording process for Abyssal Trip differs from previous releases in that the band — guitarist Robert Sörling, drummer Jonatan Rimsbo and Olsson — opted to capture the performances while holed up in the mental bathysphere of a house in the countryside near Stockholm. “The songs benefitted from the relaxed environment of being away from everything,” Olsson explains. Indeed, the album sounds confident and meticulously arranged, afforded by the band’s isolation. Sörling mixed the album and it was mastered by Monolord drummer Esben Willems at Berserk Audio.

Album opener “Bellwether” begins dramatically with a very slow, nearly minute-long fade in of rumbling distortion setting the stage for heavily distorted bass and guitar plucking out the lugubrious riff for another minute and a half before the drums begin, and likewise equally as long before vocals gurgle to the surface. “Lake” abruptly shifts gears, opening with an unusually fast gallop before rupturing into thundering doom that soon drops into a clean-tone Middle Eastern melodic breakdown. The title track serves as the album centerpiece, opening with ominous film dialogue about blood sacrifice that launches into pummeling, detuned guitars rumbling over gut-punching drums and howling vocals hearkening to the proto-sludge of Pink Floyd’s “The Nile Song.” The dynamic relents briefly for a slow building clean guitar melody before all instruments lock into a jerking riff topped off by a trilling Iommi style lead. Throughout, Abyssal Trip is, just like its title suggests, an epic tour through desolate zones which yields much to discover.