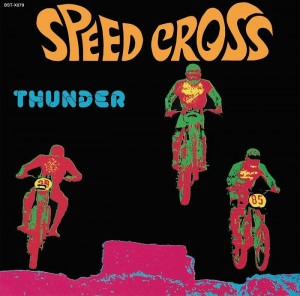 Released in 1980, "Speed Cross" by Thunder is an adventurous dancefloor epic seeing octave basslines and galloping disco beats supporting galactic pads, kinetic guitars, and flamboyant talk box solos. The track was originally backed by the pastoral prog of "The Game," wherein jangling acoustics and funky clavinets give way to charismatic vocal magic, as a sun-soaked classic rock groove cruises down some endless summer highway. And now, in reissuing both tracks, Best Record Italy has also invited in Mystic Jungle and Whodamanny for a spaced out remix of "Speed Cross." Acidic basslines flow through dub delays, Hi-NRG chords flash like a heatwave mirage, and disco beats crack beneath celestial synths and star-seeking funk licks before the track erupts into a sinister guitar solo soaked in psychedelic fuzz.

Patrick says: Speed Cross has been a big fave of mine since I was introduced by Piccadilly regular Pip (Big up yourself GOLDMAN!!!), and in true Talking Drums style there's a wrong speed version of this lurking on my hard drive. Luckily for you, Mystic Jungle and Whodamanny spare my blushes and your ears from that disaster, cooking up an outstanding reshape packed with analogue fx and Neapolitan attitude.