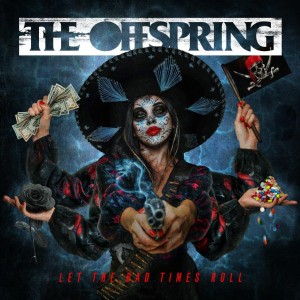 The Offspring is a punk rock band from Garden Grove, California, formed in 1984. The band's current lineup consists of lead vocalist Dexter Holland, guitarist Noodles, drummer Pete Parada and bassist Todd Morse. Over the course of their 36-year career, they have released nine studio albums.

The Offspring is often credited—alongside fellow California punk bands Green Day, Rancid, Bad Religion, NOFX, Pennywise and Jawbreaker—for reviving mainstream interest in punk rock in the 1990s. They have sold over 40 million records worldwide, making them one of the best-selling punk rock bands in history. The Offspring achieved its first commercial success with their third studio album, Smash (1994), which has sold over eleven million copies worldwide, setting a record for most albums sold on an independent record label, and was the first album released on Epitaph to obtain gold and platinum status. After switching record labels from Epitaph to Columbia in 1996, the Offspring continued their commercial success with its next six studio albums: Ixnay on the Hombre (1997), Americana (1998), Conspiracy of One (2000), Splinter (2003), Rise and Fall, Rage and Grace (2008) and Days Go By (2012); the first four were certified platinum, multi-platinum, platinum and gold status by the RIAA respectively.

The legendary So-Cal punk group The Offspring are back with their 10th album and first new offering since 2008. After releasing two standalone tracks in 2020 - the over-the-top cover of Joe Exotic's (of Tiger King infamy) "Hey Kitty Kitty" and a rendition of Darlene Love's classic "Christmas (Baby Please Come Home)" - the band is ready to plant their punk rock flag in the sand once again with their blistering new album Let the Bad Times Roll.

With the help of producer Bob Rock, Dexter Holland describes the album as "the most cathartic thing we've done. The messages might be dark, but at the end what's left is that communication is important, working through feelings is important and most of all, hope is important."

Then let the bad times roll for now, in the hopes that good times lie ahead.

Barry says: I was a MASSIVE Offspring fan back in the day, I still have and play their first five albums or so on a regular basis, but I kind of stopped listening after Americana. Though there is a significant polish to their sound now, Holland's vocals are as ubiquitous as ever and I can tell without looking that Noodles is still on guitar duties. A superb outing for a band into album double-digits.