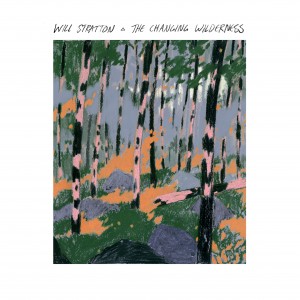 Will Stratton’s rich catalogue is proof that the Hudson Valley folk musician thrives on exploration and reflection. Chart his trajectory over his previous six albums and you’ll find a songwriter not content to stay comfortable or do the same thing twice. From his 2007 debut What the Night Said, which he released aged 20, to 2014’s Gray Lodge Wisdom, a resilient and gorgeous LP which documented his bout with cancer, as well as 2017’s Rosewood Almanac, a de facto love-letter to song-writing, his guitar, and his favourite records, the subtle but sizable tweaks to his process, arranging, and writing have been revelations. “I’ve always tried to make the process of making music as much of a source of pleasure and exploration as possible,” says Stratton. So it’s no surprise that The Changing Wilderness, his resonant and clear-eyed seventh album, pushes him to expansive new heights again.

The 10 tracks on the LP came about from an intense four-year period of soul-searching and change for Stratton, where he knew he needed to change the way he wrote songs. “I was just really sick of introspection,” he says. “I had to write music that felt like it was engaging with the outside world, rather than focusing on what was going on in my own life like on my earlier records.” With the 2016 election, Donald Trump’s Presidency, and rising right-wing extremism on his mind, Stratton set out to interrogate his country’s present crises. Like the best protest music, these songs aren’t didactic or preachy. Instead, they ask more questions than claim to have answers with Stratton’s lyrics taking a scalpel-like approach to the very worst of human nature.