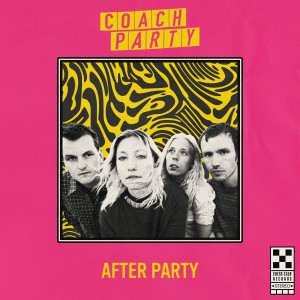 Emerging Isle of Wight four-piece Coach Party have today shared their new single and video ‘Everybody Hates Me’ via Chess Club Records. The band have also announced a brand new EP After Party - featuring ‘Everybody Hates Me’ and previous single ‘Can’t Talk, Won’t’, which received rapturous support from the likes of BBC Radio 6 Music’s Steve Lamacq, Jack Saunders (who crowned the track a Next Wave) on BBC Radio 1, and Radio X’s John Kennedy.

Written amidst the chaos of 2020, After Party focuses on themes of everyday life and was recorded, produced, and mixed by the band’s own Guy Page. Eastwood explains: “Each song on the After Party EP came quite naturally to us, many of them are about difficult people, whether that be work colleagues, family members, and even ourselves (like in ‘Everybody Hates Me’). In other tracks we talk about whether we’d be okay on our own and dealing with self doubt and lack of trust - it’s self deprecating but in a positive therapeutic kind of way.”

“We wanted the sound of the band to come through in a more natural and raw way on this record, capturing a specific moment in time. It feels to us like a sequel which gets a bit more love than the original - like Bogus Journey to Excellent Adventure. We had a feeling that it might be a long time before we get to play live again so a part of us wanted to make this EP a bit like a gig and refrain from going mad with overdubs… face melting riffs over studio tricks. Rumour has it that Paul McCartney wanted to produce this one, but we told him we need a little longer to carve our own sound and told him to call back in 2021… he might have lost our number”