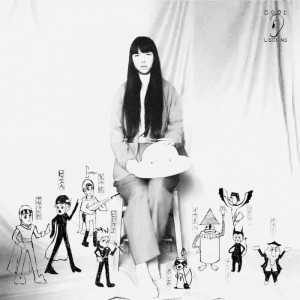 “I didn’t trust anyone adult,” claims Nana Yamato, “even my parents”.The 20-year old walks the streets of Tokyo like a superhero incognito. By day, Yamato is an ordinary girl who marches anonymously between her flat, her school and her job. But by night, when the world gets quiet, and the demands of education and employment have subsided, she becomes something else — a young artist whose urge for connection and expression has created one of the best underground pop records to come out of Japan, and elsewhere for that matter.

“They thought I was a bad girl who went into weird stores,” says Nana, explaining her schoolmates’ impression of her as a teenage record collector. “In high school I had no friends to talk to or spend time with. But, somehow, my teachers and classmates knew what I was doing after school.” Her calling was found when one day she entered Big Love Records in Harajuku, Tokyo to buy an Iceage album. She then began going there everyday after school, where her studies shifted to the week’s latest indie rock releases. “Everything in my life started there.”

Nana Yamato’s brilliance lies in a profound imagination that confronts the isolation and claustrophobia of Tokyo life, without losing grasp of the whimsy and romance of girlhood. “I think Tokyo is a lonely city,” says Nana. “It’s more like an empty city. It’s like there’s nothing in it but buildings. A big stadium was built, but the Olympics were postponed. It’s empty.” Yet it’s hard to ignore the romance the artist has with the streets that she walks; Japanese and English vocals sing about the lights and sounds of the city, as if there’s no place else she could exist. Each song on Before Sunrise, her debut album, is a secret hidden in the late-night glow of a young girl’s bedroom, created in the precious witching hours of the teenage heart, before dawn returns with the tedious demands of adulthood. The self-expression that was not nurtured in school or in her family is finally set free on opening track “Do You Wanna”: “Dreams are gone far away from reality / I climb up the hill, that tumbles to the ground, every time I try”. Dreams, and the language of living inside one’s imagination, are the prevailing theme of Before Sunrise. Yamato describes her style as “critical fantasy”, a fitting label for a sound that exists as much in a carefree daydream as they do in a crowded subway.
Nana’s debut LP, much like her previous 7” records released under the ANNA moniker, is a strictly DIY affair. Yamato sings and plays guitar, creates beats and MIDI melodies, in addition to creating the drawings and design of the LP itself. Produced by P.E.’s Jonathan Schenke, who has worked with Parquet Courts, Liars, and Surfbort, among others, Before Sunrise marks the arrival of an artist who has found her voice. She is not just the pupil of the new arrivals bin, but a life spent as a defiant dreamer, in the secret world that begins after childhood and before sunrise.