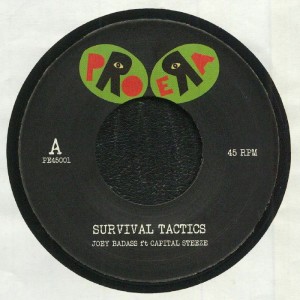 Holy shit, this is a hard hitting little 7"! Two of the finest moments on his debut solo mixtape "1999", 'Survival Tactics' and 'Righteous Minds' saw a 17 year old Joey Badass taking a break from this Flatbush highschool to pay perfect homage to the golden age of hip hop, flying in the face of the rap landscape back in 2012.
On the A-side Joey and fellow Pro Era member Capital Steez flawlessly flow over a fine Willie Bobo sample, bringing that Native Tongues energy into a new century for 'Survival Tactics', while the flipside is a wicked wormhole into the sounds of the early 90s. Firstly, Bruce LeeKix flips Axelrod and Monty Alexander samples into a dreamlike beat in that "Electric Relaxation" mode, then Joey Bada$$ reflects on the struggle to ackrite in the midst of drug dealers, corrupt cops and gang bangers, and the cherry on the top is a snippet of Nas' dialogue from Belly! The dopest folks.