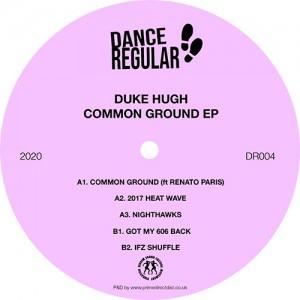 It's no secret that we've been fans of Dukes music for time! All the way live from Groningen Netherlands, Duke Hugh is a multi-genre instrumentalist. He has a real musical understanding and a unique ability to mix genres in a way that makes perfect sense. Connecting Broken Beat, House, Reggae, HipHop, Electronica, Jazz and even Folk in his DJ sets and productions. He’s been making his mark for some time and isn’t afraid to do things his own way, it’s unique. He stays in his own lane, yet remains accessible.

We’d been rinsing his Music of Color release ‘Broken Samba’ on Worldwide FM on the CoOp presents show. It was a track that got all the Bruk heads attention. As well as key releases on Rhythm Section and HW&W (home to the likes of Kaytranada, Ta-Ku & Pomo) Duke has always delivered a certain quality and unique style which had our attention for a while. So when he sent through the tracks for Common Ground we got really excited!

We were playing the track ‘Common Ground’ out and it was getting the dance floor hot! It was an instrumental at the time and Renato Paris was in the dance (a singer that EVM has been working with, plays keys with Moses Boyd and is one of Gilles Peterson's one to watch) he came up and asked, “What's This?” grabbed the mic, peak time and layed down this dope freestyle vocal, it was a jaw drop kinda moment for us all! That was it, we had to make it happen! So we linked up Renato and Duke and it became the lead track on the EP. An infectious song that literally drips in soul and future R&B, and just fits perfectly over the strings on this killer broken beat track! It’s one that will stick in your head and make you play it twice!

The whole EP is nothing short of quality. From the sultry jazzy Bruk vibes of '2017 Heat Wave' to the monstrous club track ‘ Nighthawks’ an up front stomper with live drums and a bassline that'll make you shiver inside that funky top line.

‘Got My 606 Back’ has been getting rinsed by the Summer dance Forever crew’s KC The Funkaholic and was well received by dancers worldwide when it was used for an SDF promo earlier in the year. We’ve since had many of them asking when this is coming out! This one is a real body mover, sweat towel advised!

Finishing up on ‘IFZ Shuffle’ a wicked little house shuffler that almost takes you back to the 90’s. It has this sweet piano breakdown that then introduces synths and congas until the groove kicks back in again. This track and the whole EP for that matter, works in a multitude of situations. It wont fail!