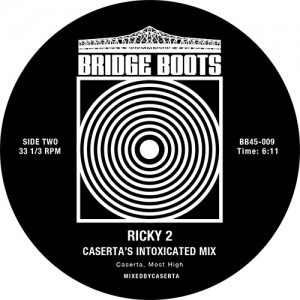 With a little bit of research you'll realize that Ricky 1 actually didn’t come out on Bridge Boots but on thatmanmonkz imprint Shadeleaf back in 2015 and received loved from Matthew Dear and Sam Divine to name a few.

A little over 5 years later and Caserta is back with the sequel! Contrary to popular belief Caserta doesn’t usually 'edit' (with the exception of BB45003 release Diana). But he decided to bust out the ole’ Razor-N-Tape for the 40 year anniversary of this dancefloor classic! While anyone with party rock capabilities can improve on an already classic composition. 'Supa Engineer Caserta' made sure to take his time to take make sure the sonics went for 1981 to 2081.

Patrick says: Caserta revisits Rick James' disco-funk bomb 'Give It To Me Baby' with a fresh variation for 2021. Helluva drug etc...