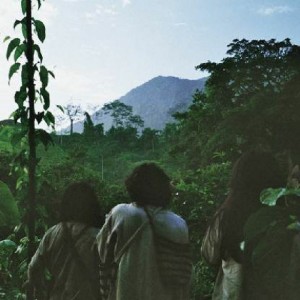 In May 2019, I recorded an album at a Kogis’ (Kagabas) village, in the Sierra Nevada mountain of Santa Marta in Colombia. Kagabas are indigenous people who consider themselves to be the guardians of the Earth and are concerned by the modern world’s attempts to destroy it. The mountain - in Colombia - is their home, it is quite literally a microcosm, a mirror of the planet in which every ecological zone is represented. The damaging lifestyles which stems from the capitalistic dogma are affecting their environment and from their vantage point on the mountain they can see how this is straining the rest of the planet.

Singing is a staple feature of the Kagabas culture, it is considered as a way to connect with the environment. There are for example a song of the monkey, of the deer, snake, laughing or even death - singing is a way for the Kagabas to feel safe around these animals and concepts and to live peacefully among them without fear and without the need to chase them away. As there’s no writing, music and singing are a way to pass memory, knowledge and awareness down through generations. The ongoing ecological disaster, the uncertainty of the current times and the temptation for many of the youths to leave the mountains for the big city life make this transmission issue all the more critical.

As we exchanged prior to my visit and while I was there, the recording and sharing of these songs was a recurring topic and we agreed to have singing at the core of this musical project. I was welcomed to spend a week within their community to record this album. I spent most of the time there with the Máma of the village (Mámas are spiritual and intellectual guides that keep the memory of the civilization) and his son Camilo, with help from Franz who has been working with the Kagabas for about 15 years now

Patrick says: The extra hyped Lion's Drums takes us on a field trip to Colombia with this spiritual collection of folkloric musica. Absurdly limited, so don't sleep!