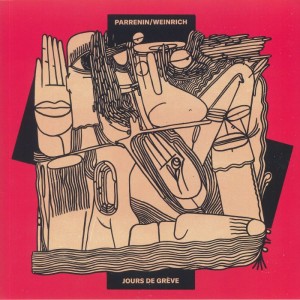 Imagine Prometheus, the thief of fire, the father of civilisation, had been spellbound by the sirens chanting and never felt pain, when the eagle bit his liver. Total enchantment, created by sound to overcome the pain of existence. A sound, styled by the ideal harmony of body and soul. And yet, the pain is still there, hidden between the notes, driving a romantic vision of salvation.

If Prometheus could have translated his fictitious epiphany into singing, it might sound like Ghédalia Tazartès’s chanting in “White Layers Over Black Paper”, one of the eight snake dance tracks-not-tracks by German producer Detlef Weinrich aka Tolouse Low Trax and French singer, hurdy-gurdy, spinet and harp player Emmanuelle Parrenin. During some days of intimate plays in Paris they created “Jours de Grève”, a bouquet of music full of mirrors, eyes, statues, secret doors, rooms, and blood. With the offhanded help by friends and like-minded souls like Versatile aura mystic Gilbert Cohen, French avant-garde saxophone player Quentin Rollet and his fellow countryman, experimental voice artist Ghédalia Tazartès, they transformed in Cohen’s studio impulsive emotions into a kind of medieval cult sound that dances with tribal dub layers in search for a higher ground.

The session took place during an intensive time of public strikes in the French capital, that tied up the public life of Paris and gave birth to the album’s title Jours de Grève. After the jam, Weinrich drove back to his old hometown Düsseldorf, sat down with his friend Jan Schulte aka Wolf Müller and mixed the captured notes, sounds, rhythms and singings into pristine tripping music, that avoids stylistic categorisations. As rather architecture, sculpture, painting, performing or film could express what Parrenin’s hypnotic hurdy-gurdy performances, Tazartès’s ancient deeply emotive ululations, Rollet’s almost religious saxophone notes and Weinrich’s toting grooves evoke in the psyche, it might be better to go back to Prometheus and the fire, that brought us light and warmth. Jours de Grève does too.

And it is a stolen one. A borrowed one. Affected by art and life outside of sound. Lent from a forgotten monument in a random city around the world. Swayed by an afternoon glass of wine in a Parisian street café. Affected by music of all ages. Unconsciously developed in the spirit of Philippe Doray and Les Asociaux Associés, Théâtre du Chêne Noir d'Avignon or Areski Belkacem’s collaborations with Brigitte Fontaine. Above all Emmanuelle Parrenin extramundane voice swings, mutating between speech and chant, while Ghédalia Tazartès mourns like a wise illusionist. In tunes like “Caltec’s Dance” you even feel the airiness of early Fun Boy Three recordings. All that is rooted on Weinrich’s Tolouse Low Trax magnetic signature grooves, this time floating between dark tribal upbeat sexiness and dubbed-down bass sculpturalism.

If it is true that illuminating music stirs by its mysterious resemblance to the objects and feelings which motivated it, then “Jours de Grève” is an in impulse composed primitive state of rhizomatic paranormal psychic phenomenon, that incorporates all the worlds, that the naked eye cannot see.