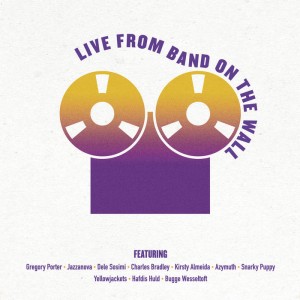 This release features a selection of some of our favourite songs, from some of the most memorable shows, to have been recorded as part of the Band on the Wall archive.

These tracks represent our commitment to celebrating the diversity and excellence of music created by remarkable people from across the world. All tracks were performed at Band on the Wall and very kindly contributed by the artists for release on this CD, which has been produced to support the venue and our ongoing mission to promote and celebrate the great music of many cultures, during this challenging year.

As 2020 has become a defining year for all of us who work to bring people together to celebrate live music, for us this represents not only the journey we have been on over the last ten years, but also helps to define our future commitment to this amazing music.

A special thanks to the artists, labels and management that have helped assemble this wonderful collection of tracks, recorded live inside Band on the Wall between 2009 – 2014. All sales proceeds will be split 50/50 between the artists and Band on the Wall.

Millie says: Missing live music? Band on the Wall Manchester's iconic institution has released live tracks will take you right back to the atmosphere of being at a gig. We will be there again! Support venues and live music with this fundraising release.