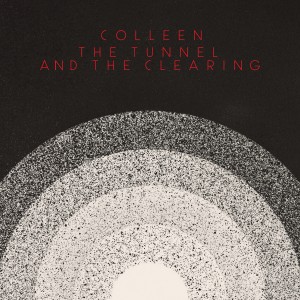 Colleen is an aboundingly inventive composer and artist. For two decades Cécile Schott, as Colleen, has crafted welcoming, enchanting, and bewildering music. The multiinstrumentalist and vocalist’s timeless compositions make use of carefully selected tools to mold memories into transcendent splendor. The Tunnel and the Clearing finds Schott at her most vulnerable and confident, invoking contemplative and swirling organ processed through analog electronics, steady drum machine syncopations and her distinctive voice. On an album centered on processing the complicated washes of emotion through tribulations and revelations Colleen presents a vision of breathless clarity.

The Tunnel and the Clearing was developed over a period of transformative change. Colleen began work on the album in 2018 but was all but halted by extreme fatigue from a previously undiagnosed illness. Years of treatment and adjustment eventually led to relocating to Barcelona, soon followed by lockdowns and then the dissolution of her longtime partnership. Reflecting on these cumulative experiences she reimagined her compositional practices, spending months in near complete silence. Says Schott, “Never before had I felt so profoundly the power that music has, through harmony, melody, rhythm and sound itself, to express the whole range of human emotions.” The resulting seven pieces investigate the complex, at times contradictory relationship between excitement and fear, anger and understanding, struggle and triumph, all focused on a reconstruction of the self.

Colleen’s albums are unified by distinct and personal instrumentation, built around music boxes, viola da gamba, or electronics, they somehow all remarkably share a dreamlike modern quality. For The Tunnel and the Clearing Schott restricted herself to using analog electronic instruments including the Elka Drummer One, the Roland RE-201 Space Echo and Moog Grandmother synth, coupled with Yamaha organ keyboard. Stunningly, Colleen achieves the rich emotional intricacy and the lush density of textures on The Tunnel and the Clearing through almost entirely live performance and processing. These detailed and affecting compositions mirror Colleen’s grappling with her own psyche. Schott elaborates “I found direct correspondences between my internal discourse, its obsessive, frantic attempts at making sense of what I could not understand, and the music I was making, with motifs functioning as questions and answers, doubts and assertions.” Clicks, hums, warbles and throbs emulating our evolving internal worlds, an “emotional noise.” A musical journey through the tunnel toward the clearing at its end. The Tunnel and the Clearing is a work of lucid reverence, a constellation of marvels suspended in air.

ColleenThe Weighing Of The Heart