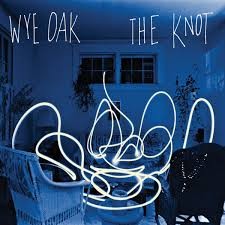 Wye Oak's second album, released in 2009. Press quotes - “The shimmering of shoegaze slowed down into a throbbing pulse, and loud-quiet-loud aesthetics channeled around ethereal vocals. Their first album was good, this is just amazing. The songs are sleepers and insidious, lounging around for days in your head without you even being aware.” AQUARIUM DRUNKARD // “So dense yet so simple and so affecting, the longing, mournful sway-rock of Jenn Wasner and Andy Stack’s Wye Oak after just two albums already stands to be the music Baltimoreans 15 years from now hold up in the same way we hold up, say, Lungfish today.

The songwriting is pristine: Its melodies, downcast and celebratory in the same measure, burrow under the skin like a gentle inoculation. The lyrical ideas are timeless. Bits of country and folk twang their way to the surface like remembered bits of a dream. And sounds and layers stack themselves improbably, and majestically, into some of the city’s finest tunes. Just a couple of years ago, Wye Oak was crafting its music in relative obscurity and, since, has found its way onto the national and world stages, spreading a whole new Baltimore gospel.”