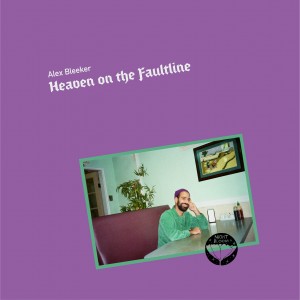 Real Estate's Alex Bleeker steps out on his own for a first full solo album, taking his music back to his homespun indie-rock roots. Initially recorded in his bedroom before adding finishing touches in the studio, the tracks have a lo-fi warmth akin to Bleeker's American heroes The Feelies & Yo La Tengo.

I’ve known Alex Bleeker my entire life. Well, okay, maybe not since I was born, but there’s no doubt that I’ve shared a fair bit of memories with him over the years. We’ve acted in high school productions of Shakespeare together, gone on late-night diner runs, argued about which Weezer album is the band’s best, and swapped mutual appreciation for the music of Yo La Tengo on car rides careening around the snaky suburbia of our hometown. Just like his Real Estate bandmates Martin Courtney and Julian Lynch, we attended high school in the New Jersey enclave of Ridgewood, a place where sticky summer days yielded cool nights with a glow so nocturnal that you can practically hear the fireflies buzzing off of this sentence alone.

Indie rock—a type of music that can easily be made or listened to in someone’s garage—often dominates teenage suburban preoccupations, and both Alex and I were no exception. You can hear this legacy of listening on his new album Heaven on the Faultline, which departs from his last full-band outing as Alex Bleeker and the Freaks, 2015’s Country Agenda. Whereas that album had a more full-bodied explicitly folk-y feel, Heaven on the Faultline finds Bleeker getting back to his homespun roots over the course of its 13 songs, from the jangly guitar pop of New Jersey heroes the Feelies and YLT’s hushed, acoustic reveries to the open-hearted folk rock that marks so much of the Grateful Dead’s early catalog.

Written and recorded over the last several years, Heaven on the Faultline’s songs were initially recorded straight to GarageBand in Bleeker’s bedroom before receiving further studio refinement in co-producer Phil Hartunian’s Tropico Beauty space in Los Angeles. With contributions from Confusing Mix of Nations’ Josh Da Costa, Cameron Stallones of Sun Araw, singer-songwriter Kacey Johansing, and Parting Lines’ Tim Ramsey, Heaven on the Faultline achieves a warm and intimate feel that defines Bleeker’s mission for the album: “I wanted to capture the moment in which I fell in love with making music to begin with. This is music for myself—me getting back to music for music’s sake.”

The unsteady times we live in certainly creep into view on Heaven on the Faultline. The deceptively easygoing “D Plus” was written on the day of President Donald Trump’s inauguration with the cursed event in mind, while the anxiety of climate change hovers just above the lovely guitar loops of “Felty Feel.” “The album is very much about dealing with the anxiety of a sense of impending doom,” Bleeker states while discussing the album’s portentous vibes. “When is the hammer going to fall? How do we go forward in the face of such anxiety and experience the complexity of life?”