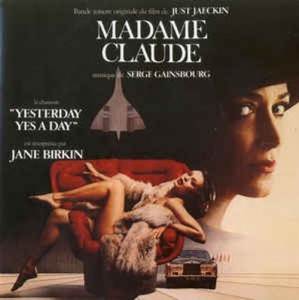 Directed by Just Jaeckin, the creator of Emmanuelle, starring Françoise Fabian, Madame Claude is inspired by the fictionalized memories of Fernande Grudet, the sulphurous instigator of the most famous luxury prostitution network in Pompidolian France.

The totally disco-funk Original soundtrack of this film released on screens in 1977 from Serge Gainsbourg is sublimated by the immense arranger- Jean-Pierre Sabar". Without forgetting the generic song of Madame Claude “Yesterday, Yes a Day” interpreted by Jane Birkin.

Serge GainsbourgIn The Studio With