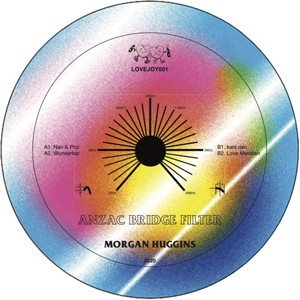 Debut record from Morgan Huggins on Lovejoy Records. It stands proud combining careful precision and an unbridled lack of restraint combined with that new founded hedonism which seems to characterize much of the music from Sydney. With an extreme attention to detail, Morgan’s sound fluctuates between delicate and throbbing moments, hi-tek breaks and paradisical dance music.

While Morgan is new to releasing music, he’s no stranger to Australia’s scene. Co-heading events, raves, festivals and gigs under the name of Lovejoy, Morgan’s experience with music has already been a long and personal one. Having supported the likes of Moodymann, Jennifer Loveless, Tom Trago, Andy Garvey & Lou Karsh, he has been patiently waiting for this moment for some time!

Morgan created “Anzac Bridge Filter” over the last two years, as he reconnected the city where he grew up, and where he now lives. It’s named after his favourite bridge, which he’s spent many hours traversing both physically and mentally, matched with the filter on his favourite synthesiser, Moog’s Sub 37.

‘For the most part, this record was finished in various small town libraries up and down the East Coast of Australia as I travelled and camped by myself at the start of 2020. The bushfires were still very much burning, and everywhere you went you could taste the smoke, and see freshly burnt houses, and yet everywhere I went people smiled at each other as they walked down the street.’

As he continues to produce, perform and collaborate, Morgan Huggins is moving into a new phase in 2021. He embraces his exposure to the music culture around him and has crafted a unique sound which is now being showcased to Australia and the world.

‘I would particularly like to thank the librarians who were undoubtedly confused by my presence,’ Morgan said.