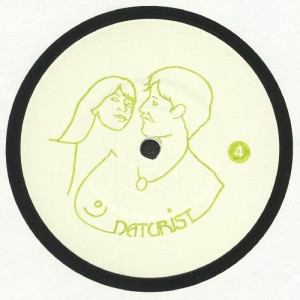 Despite record lows on the Mancunian thermometers right now, we can all bask in the warmth of this expressive four tracker from Arnaldo. It might have taken a little time to get here, but not to worry, the fourth release on Naturist is frankly timeless. Though he operates in the same deep territories as say Sprinkles, Arnaldo avoids the cerebral, cryptic style of the chin strokers, choosing instead to embrace the realm of the senses. Taking the utmost care with the sound design, the Berlin based producer teases the maximum weight and tension from the frequency range, his seductive arrangements masking the power of the platter.

In search of a better dance floor ecosystem, Arnaldo opens the set with the rolling bassline and glittering pads of "Unknown Nude", an impressionistic marriage of sub tickling low end and shimmering high mids . Rendered with fluent strokes and nuanced samples, this is living, breathing house music. "1:17pm They Stole My Partner" follows on, filling the soundscape with the chatter and cry of Amazonian frogs while a drilling bassline churns through the sparse percussion. Shamanic in its truest sense, and free of any sample pack wackness, this is immersive and organic alchemy. Bringing the tempo and intensity down on the B-side, the Argentine explores different styles and flavours on a pair of breathtaking tracks. The dubby, stoned and stepping "Post Rotation" provides a little early morning respite, loose rhythms and precise keys riding a wavey soundscape before "Man From The Mountains" strolls out the B2 to steal the show. Though it only registers a stately 108 on the BPM counter, this isn't your typical chugger. Firstly, the interplay between swelling bass tones and delicate percussion forms a hip shifting groove undoubtedly informed by his Latin heritage, while the breathy pads and gliding melodies coalesce into a vision of heart aching beauty. I've had the pleasure of hearing this masterpiece on a proper club system and it is pretty much life changing.
Flawless from top to bottom, left to right, NATURIST003 is easily the best house release we've had in the shop over the last 12 months.

Patrick says: Possibly the most slept on producer on the planet, Arnaldo turns out a sublime four tracker of sensual, sensitive house music. Ocean deep, emotive and expressive sounds rendered in the most pristine sonic detail, this is a hidden gem. Do not miss out.

ThundercatThe Beyond / Where The Giants Roam - Red Vinyl Edition