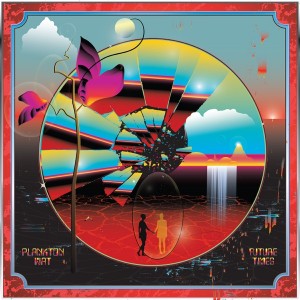 As Plankton Wat, Dewey Mahood uses his considerable guitar prowess to deliver an album that encompasses both the wild, seeking energy of free-improvisation and the deliberate arrangements of more traditional composition.

With his deft and stylistically varied playing, Plankton Wat’s ‘Future Times’ escapes psychedelic tropes and chemical fuelled alterations and instead celebrates an escape into the natural world.

‘Future Times’ taps into psychedelia’s counter-cultural heritage as music for protest, liberation and imagining new ways of being in this world.

Known for his guitar prowess in modern psychedelic music, specifically with Eternal Tapestry as well as Edibles, Elephant Factory Galaxy Research and Gärden Söund among others.