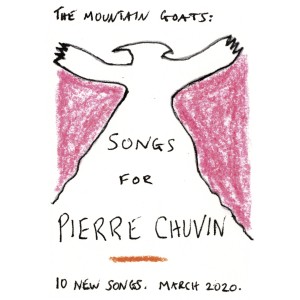 Praise for Songs for Pierre Chuvin:
“Recording on the same boombox that launched his career, John Darnielle returns to his lo-fi roots for an album of alienation, ancient pagans, and making it through the year together.” Pitchfork

“Full of images fit for these dismal times and slogans suited to surviving them, Pierre Chuvin is an inspiring reminder of how much each of us has left to learn.” NPR

“[Songs for Pierre Chuvin] can be used to escape the present emergency—or, if the listener so chooses, to better understand it.” The Atlantic

“Songs for Pierre Chuvin is exactly what we’ve come to expect: big-hearted songs full of warmth and smarts,

1 Aulon Raid
2 Until Olympius Returns
3 Last Gasp At Calama
4 For The Snakes
5 The Wooded Hills Along The Black Sea
6 January 31, 438

The Mountain GoatsDark In Here

The Mountain GoatsIn League With Dragons