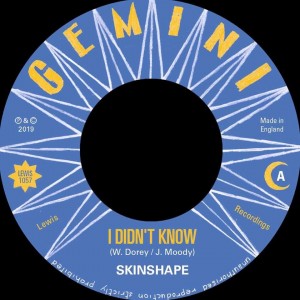 With over 15000,000 (yes, fifteen million!) plays on YouTube and over 2,000,000 on Spotify we thought it was only fair that Skinshape’s most popular song was released on glorious vinyl. The track is already on the ‘Filoxiny’ album so Skinshape extended the mix and backed it with a dub version for the flip. Skinshape is the project of British musician William Dorey. The sound has roots in many genres but in particular 1960s Funk, Soul, Reggae, Psychedelic Rock, Afrobeat and Folk.

Aside from the Skinshape project Dorey was bassist for the band Palace from 2014-2017 and also runs a reggae label called Horus Records based in North London. About I Didn’t Know from Dorey himself: “This is the most 'pop' song I've possibly ever made, and possibly the most 'modern' sounding. It is about being in a difficult relationship and not knowing how to deal with it and making mistakes as a result. I wrote and recorded most of the song around the drum pattern, and created some (terrible sounding) digital orchestral parts temporarily whilst I created the body of the song. I recorded the strings and horns in the last part of the recording process before doing the final mixes. The horns were recorded separately with the help of my long-time friend (since school) and master arranger Jon Moody (of the group Franc Moody).”