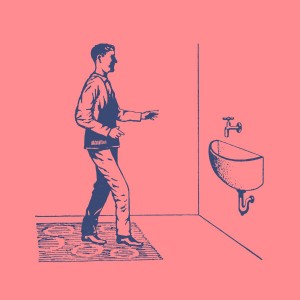 Following on from the likes of Goat, Josefin Öhrn, Hills, Flowers Must Die, Centrum and GÅS - VED continue to be among the wonderful plethora of Swedish bands to release their exploratory music on Rocket Recordings. With 3 albums, 3 EPs (including one on Rocket), a compilation on labels like Höga Nord and Adrian Recordings already behind them this Malmö 5 piece are famed for creating trance inducing, repetitive, psych. Their ever evolving sound has always taken in many global influences, from Middle Eastern to African to the monotonous explorations of composers like Steve Reich and Terry Riley. Rhythmically driven like the jittered ecstasy of a Post Punk band covering a Oriental Surf a track, “Ett visst fängelse” (translated as ‘A Certain Prison’) establishes a pulsating clink clack shimmer that is as hyper actively addictive as CAN in full animated instrumental groove.

“The Embrace Of The Oarfish” the lead track, advances the propulsive pummeling to a more aggressive sound centred around a repetitive single bass note that masquerades like an menacingly deep percussive outlaw. The looming ribbon like nature of the track slithers like the giant sea serpent the title alludes too - some say the Oarfish can forecast earthquakes themselves, maybe its the resonance of the bomb shelter in Malmö that is the bands rehearsal space that imposes itself tremor like through their oscillating work. The firewood that is VED’s work has reminiscent echoes of the primal work of UK act Snapped Ankles, but VED’s journey is a wholly unique controlled burn where rapid oxidation devours any listener into a blaze of restorative enchantment.T