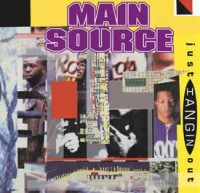 The dreamy, swoony sounds of Vanessa Kendrick’s timeless ‘90% of Me is You’ is ever-present during this stone-cold classic, while Sister Nancy’s unmistakeable ‘Bam Bam’ lends several elements to the mix. Throw in some Skull Snaps and Sweet Charles and you’ve got the perfect soundtrack for a roll call of Large Professor’s nearest and dearest.

There are plenty of reasons why so many regard ‘Breaking Atoms’ as an alltime classic album, and the sheer variety of singles lifted from it is chief among them. Large Professor was happy to roam over varied topics at a time when many rappers had a manic focus on one thing. And where better to hang out with friends than at a barbecue? ‘Live at the Barbecue’ is rightly regarded as one of the best posse cuts of all time, and famous for showcasing the debut of one Nasty Nas.

While he delivers a dope verse full of quotables over drums from Bob James’ oft-plundered ‘Nautilus’, credit is also due to the other guests. Fatal and Akinyele aren’t disgraced in this company, and Large Professor tops it off with a rare verse of pure brag-rap. An undisputed entry in the pantheon of head-nod hip-hop, this is its first official UK release, and another debut on 7”.

Patrick says: A pair of prime time bumpers from Main Source's mega 'Breakin Atoms', essential in part for 'Live At The BBQ', a sick cypher featuring the first recorded appearance of Nas. Hype.