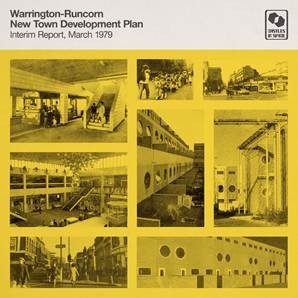 Chapman-Fox grew up in Lancashire, and having been a frequent user of the famous Preston Bus Station in his youth, he was struck by the enormous chasm between the sixties architects utopian vision for what new towns should be and the sticky-floored, piss-streaked reality. He explains: “The more I looked into it, the appeal of these visionary architects grew. It felt like perhaps the most visionary building projects of all post war Britain were some of the estates built in Warrington and Runcorn new towns, these twin towns on either side of the Mersey. The estates of Runcorn were space-age futurist with external plumbing, rounded windows and raised walkways. But as housing, they were a failure. Runcorn was the last great UK modernist, futurist building project built with a community in mind. “Interim Report, March 1979” looks at this interim, this gap between vision and reality.”

At the time of recording the album, he says, “It seemed like there were a lot of ersatz-soundtracks to lost John Carpenter films, or obscure giallo “classics”. I preferred to find inspiration from the surreality of the mundane, hence the creation of Warrington Runcorn New Town Development Plan. 1979 seemed the perfect point to be located in time, sitting on the razor’s edge between the post-war consensus and the dawn of Thatcherism. As the concept took hold, I tried to format the music according to the capabilities of a small, provincial recording studio in 1979. I limited the number of instruments available, the number of tracks available and so on. This really helped to shape the album and anchor the concept. As a teenager, I was into rock and looking for ever more extreme sounds - AC/DC gave way to Metallica gave way to Carcass. But by the 90s I heard Warp artists and that was me hooked. What they were doing could be far more brutal than anything by four sweaty long-haired guys with guitars. But it could also be funky, beautiful, ethereal, melodic and so much more.” It’s that ethereality and true sense of time and place that Chapman-Fox has captured so well here. “1979 marked a change in the political and wider culture of British society. The Warrington- Runcorn development marks the swan song of post-war urban planning in the UK – soon the ethos of building better communities would be replaced by Thatcherite “no such thing as society” and “Greed is good” mentality. And look where that got us…“

A1: Gateway To The North
A2: Aeriel Views By Helicopter
A3: Castlefields
A4: The Town Of Tomorrow
B1: Intercity
B2: Shopping City
B3: Windmill Hill
B4: Gateway To The Future