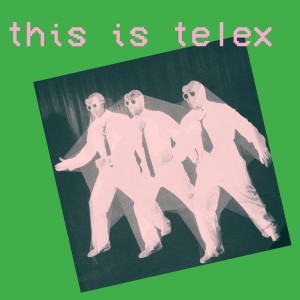 
This Is Telex is a brand new compilation collecting 14 tracks from the innovative Belgium trio, covering their career from formation in 1978 up to the final album in 2006. This compilation includes the hit single Moskow Diskow as well as their Eurovision Song Contest entry, aptly called Euro-vision.

There are also 2 wonderful and previously unreleased tracks unearthed from the Telex archive, a cover of The Beatles’ Dear Prudence and a reinterpretation of a Sonny & Cher track called The Beat Goes On/Off.
All the tracks were newly mixed and remastered from the original tapes by band members Dan Lacksman and Michel Moers, keeping all the tracks in the spirit of the originals but adding a freshness to them.
This compilation sets the way for a comprehensive reissue campaign of the entire Telex catalogue.

Housed in a gatefold cover with printed inner sleeves with notes by David Stubbs.

Barry says: Active all the way from the late 70's up to 2006, there is an absolute treasure trove of wonderful Telex tracks out there, but this is by far one of the best ways to get clued in on their own particular brand of off-piste playful synth business. Including a couple unreleased tracks and new mixes of some classics, this is a must-have.