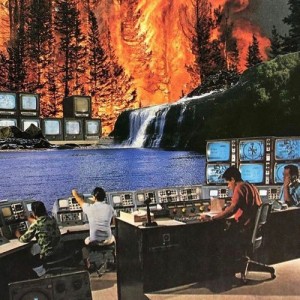 “Chaos Blooms” is an exploration of chaotic and random elements within composition, performed on modular synthesizer. Its initial inspiration stemmed from a sustained period of listening to lots of Free Jazz; Sun Ra, Pharoah Sanders, Miles Davis etc. As Stephen says “I was really enjoying the apparent chaos of the music, how it flowed freely like something from the natural world. The same could be said about a lot of ambient music, but that only tends to mimic the more pleasant and calming aspects of nature. Whereas- in reality, nature can also be unpleasant, discordant, even frightening. I wanted to make an album that explored that, using randomly generated voltages to control various aspects of the composition, including pitch and timbre.

The problem random composition presents, is that too much of it basically becomes noise. There needs to be some degree of structure to it, some element needs to be repeated. At least to make it musically appealing in some way; so the trick here was to find different ways to tame that chaos, and to sculpt it into something which still resembled a Polypores record.”

The finished results represent another wonderful record, dressed in a fabulous Solar-Collage sleeve and is released as a one-time, limited pressing of 500 on cream coloured vinyl.

Barry says: Big Bucko brings the bleeps for his latest outing on the always-superb Polytechnic Youth. Clever polyrhythms and jazzy syncopation sit perfectly alongside the more shimmering moments, providing both a stylistic counterpoint to his earlier work while having all of the depth and ingenuity. A wonderful, rich and transportive journey.

A1. The Computer
A2. Angel Away
A3. Dense Periodic Orbits
A4. A Lull
A5. Destroyer
B1. Machine Jazz
B2. Ambulator
B3. Dots
B4. All Scatter
B5. Fluctuations
B6. Moontangle
B7. Equilibrium

The Home CurrentNot Our Kind Of Vertigo