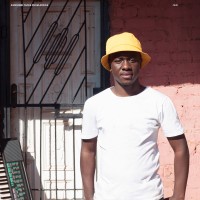 The past five years have seen amapiano, South Africa’s electronic music movement born in the townships of the country’s Gauteng province, evolve from an underground sound to a nationwide mainstream staple. Even with its commercial success though, amapiano’s DIY ethos has continued to disrupt music creation and distribution in the country. Most amapiano commercial successes today began their careers on cracked versions of production software like FL Studio, distributed their work

through file sharing platforms like datafilehost and marketed it using social media pages they controlled and influenced. Amapiano Selections, the debut album by DJ and producer Teno Afrika, gives listeners outside the movement’s online release economy an insight into the high-burn nature of amapiano that has spawned a distinct typology under its larger umbrella. Twenty-one-year-old Lutendo

Raduvha has spent the bulk of his life moving between different townships on the outskirts of Johannesburg and Pretoria in the Gauteng province. The palette of amapiano styles on the album reflect these influences.

But at first, South Africa’s youngest electronic music movement lived underground with a small, loyal following. “Amapiano is a genre that I chose because I have a passion for it,” says Teno “I started following amapiano in 2016 because I wanted to explore how it’s produced. It was not taken seriously in our country.” Interestingly, Teno Africa only gives vocals prominence on the closing track “Chants of Africa.” As a way of making their music recognizable and relatable for broadcast, amapiano producers have sometimes overly relied on vocals in the form of singing, catch-phrases and party refrains for the purpose. “It was my decision not to use vocals on this project,” says Teno “The reason is I wanted people to feel my instrumentals and style because this is my first album.” On his closing track the young producer gives a glimpse of the considered approach to music which buoys anticipation for greater things from his future releases.