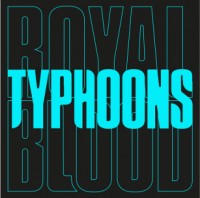 The latest evolution in Royal Blood's sound melds their fiery rock riffs with danceable beats influenced by Daft Punk, Justice, and Phillipe Zdar of Cassius. It's a small yet immediately refreshing reinvention, that pulsates throughout their new single 'Typhoons'. Frontman Mike Kerr's spiralling bass riff casts an hypnotic allure as it grows in intensity, while his vocals switch at will between a raw rock roar and a soulful falsetto. It's underpinned by Ben Thatcher's thundering beats, his taut rhythms infused with groove-laden hi-hats.

'Typhoons' will be released digitally on the evening of Thursday, January 21st with a limited edition 7" black vinyl available the following day. The vinyl's b-side features an etching of a lyric from the song.

Features Lyric Etching On B Side