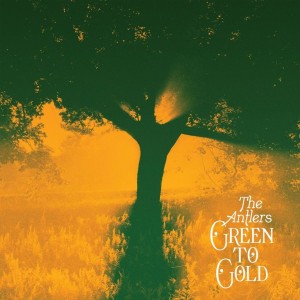 Highly anticipated record from New York's beloved act The Antlers, their first new music in seven music Perhaps what distinguishes Green to Gold from the rest of The Antlers’ canon is its arrival at a kind of quiet normalcy after a number of rather anxious records. Conceived and written almost entirely in the morning hours, Green to Gold is the easily their most luminous record to date. Following 2014’s Familiars, it looked unsure as to whether there would even be another Antlers album, after the onset of singer and primary songwriter Peter Silberman’s auditory problems.

Affecting his left ear, it was a condition that left him struggling to cope with commonplace noises. He was subsequently diagnosed with lesions on one of his vocal cords, requiring surgery for their removal and vocal therapy to retrain his voice to sing. Following a relocation to upstate New York and the 10th anniversary tour of 2009's 'Hospice', Silberman was rejuvenated and rediscovered the impulse to create new Antlers music. Of Silberman’s unique vocals, The Guardian wrote “His multi-octave voice is as intense as Jeff Buckley’s or Anohni’s, but it’s vulnerable without being precious or cloying” The first LP pressing is on ltd edition gold vinyl (represses will revert to black vinyl) September 2021 tour TBA, including two shows at EartH, London plus shows in Manchester and Edinburgh