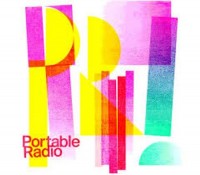 Some years ago, the world started to go weird – and that’s when the then duo, Portable Radio, decided it was as good a time as any, to start making first steps.

Phil … and Mof … shared some messages and a love of melodies, and as a gift to friends and those feeling the weight of everything, recorded a version of Brian Wilson’s gorgeous opus, ‘Love & Mercy’. The result was enough for them to start writing songs, and the blueprint for Portable Radio was born – hope, empathy, fun, love, and mercy.

Phil had cut his teeth in the Beep Seals and Mof was a DJ and student of pop, and in each other they both wanted to make music that was a tonic for the times; what transpired was a clutch of songs that were filled with uplifting, rich harmonies – stirring power pop inspired by Todd Rundgren, Wings, Carole King, Electric Light Orchestra, NRBQ, Emitt Rhodes, ‘70s West Coast AOR, The Zombies, and of course, The Beach Boys.

Soon, Robyn Gibson (The Junipers/Bob Of The Pops) joined the ranks for their star turn and appearance on the ‘12 String High’ compilation. The two becoming a trio, the output cranked up, seeing the release of the debut Portable Radio EP (produced by Jim Noir) and the Christmas Selection Box, all loaded with killer hooks, washes of dreamy harmonies, and just a sprinkling of cynicism because no-one is impervious to the all-encompassing weirdness of the last couple of years.

All of these things were the groundwork for the imminent full-length, self-titled debut, out in March 2021. The LP (vinyl/download/streaming) is full to bursting with big choruses, reflective popsike, FM ready pop, melancholic ballads, with each song is treated like it’s going to be a single.