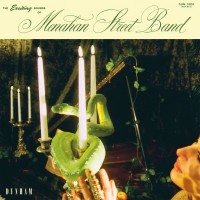 MSB tracks have been the foundation for some of modern hip-hop's most successful beats; their music has been sampled by the likes of Eminem, Jay-Z, Kendrick Lamar, Travis Scott, 50 Cent, Curren$y, to name a few.

Menahan Street Band, a veritable supergroup of some of today's most prolific songwriters, arrangers, and producers return with this beat-forward, cinematic masterpiece.

Their unique brand of instrumental soul has not only been the foundation for some of modern hip-hop's most successful beats, it has also become the perennial soundtrack and veritable vibe-generator for countless parties, art shows, and restaurants throughout NYC and abroad.

While this album carries the aesthetic torch that MSB has skillfully woven into the tapestry of their DNA, it also delves deeper into the experimental, exotic sounds that fill many of the coveted Sound Library and Soundtrack LPs of the late sixties and early seventies - an amalgamation of moog synths, electric pianos, drum machines, and a bevy of analog instrumentation, that ebb and flow in lush swells of Morriconian grandeur.

Night BeatsMyth Of A Man

Band Of SkullsLove Is All You Love