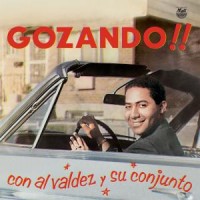 One of the 'holy grails' of 1960s Cuban music was not recorded, produced or released in Havana or New York; in fact it was made in Lima, Peru. Pianist Alfredo "Alfredito" Valdes Jr. (May 31, 1941, Havana - January 23, 2016, New York), one of the most important figures in Latin music, came from an illustrious musical family in Cuba. In 1956, he emigrated to New York with his family, making him one of the forerunners of Cuban-based salsa music in the US. Overall, the swinging MAG sessions sound like a long lost record by Cachao and Tito Puente if they led an orchestra with Charlie Palmieri on piano and Tito Rodriguez on vocals (and played pachangas like Machito's Afro-Cubans 'with flute to boot'). Always an extremely rare collector's item, Gozando!! will now be able to reach a wider vinyl-loving audience with this first-time ever faithfully reproduced facsimile edition.