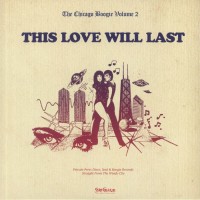 Star Creature follows up the (now out of print) "Attack Of Chicago Boogie" with another dope collection of ultra rare hard to find boogie gems. Sub-titled "This Love Will Last", it's s a team up between Chicago's Boogie Munster Crew and Star Creature. Compiled by Tim Zawada and Kool Hersh, you get four more Holy Grail Private Press Chicago Boogie tracks officially licensed and sourced direct from the artists right in their own back yards.

Some of these originals haven't even made it to you YouTube! Unseen and unheard and now unearthed. Slight DJ Friendly Touch Ups, remastered for modern sound systems. Tracks by Special Touch, Duke Turner, On Stage and Kareem Rashad.

Matt says: 'Rarities' gets banded about a lot on the disco & boogie front; but Star Creature truly dig up some unhear treasure here for the second instalment of their sell-out series. Sleep at your peril!