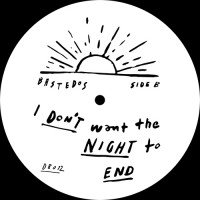 Pure disco firepower, extended, edited and tweaked in all the right places for this double header of irresistible edits from Bastedos, re-mastered by the mighty Justin Van Der Volgen. Felix D takes aim at the mirrorball on this edition of his superb series, putting his scalpel to work on a pair of well known (compared to the usually obsucre Bastedos tackle) disco winners.

On the A-side, Felix freaks Jimmy Castor's 'Anyway, Anywhere, Anytime', extended and reshaping the Salsoul nugget with tight loops, speaker tweaking EQ and maximum emphasis on the floor melting groove. If you were a sucker for the Combi / Keep It Cheap series, you're gonna buzz off this one! The B-side belongs to 'I Don't Want The Night To End', an extended edit of the Sylvie Vartan track of the same name. Originally released in 1979, this cut combines the blue eyed optimism of AOR with a relentless disco groove, then borrows a soft rock leather jacket and heads to the club. Extended for days, this is disco for the Balearic dancers!

Tried and tested secret weapons finally made available to all, 100% of any profits go to charity.

A1. Anywhere You Want To Go
B1. I Don't Want The Night To End

BastedosWhat’s Your Secret? / Do You Blow?