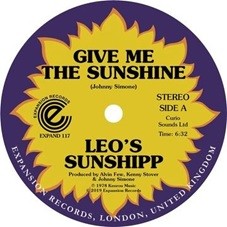 "Give Me The Sunshine" is one of the most iconic and enduring rare groove tracks. It was composed by Johnny Simone at the time he was working with Stevie Wonder at Motown. Others in the group were Kenny Stover and Alvin Few, all three of them born under the 'Leo' star sigh. Kenny worked as a songwriter at Motown and lived in the same house as Marvin Gaye at the time "What's Going On" became an idea. He co-wrote "Inner City Blues" but was only credited much later. The original "I’m Back For More" included here has equal standing in the soul world too, the song later reaching new insights when covered by Al Johnson featuring Jean Carne. Bothe songs come from the album "We Need Each Other" long associated with Expansion Records. The two songs featured here first appeared on Expansion 12" in 1986, the launch year of the label which in 2021 celebrates in 35th Anniversary.