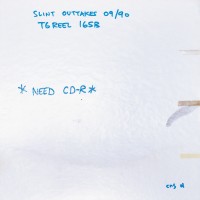 Second pressing of the highly sought after RSD 2020 12". Sounding more "in your face" (think "Nosferatu Man") than the final 1991 Spiderland LP mixes, these original mixes were mastered by Bob Weston of Chicago Mastering Service at 45 rpm for optimum fidelity. Feel the hot kick of Britt's drum, the down and dirty rumble of Todd's bass, the special sizzle of Dave's guitar, and the meaty chunk of Brian's guitar (he sings too) stronger, louder, and different than you've ever heard them before! About the original 1991 album Spiderland: Produced by Brian Paulson at River North Recorders in Chicago and released by Touch and Go Records in April of 1991, the six songs on Spiderland methodically mapped a shadowy new continent of sound. The music is taut, menacing, and haunting; its structure built largely on absence and restraint, on the echoing space between the notes, but punctuated by sudden thrilling blasts of unfettered fury.