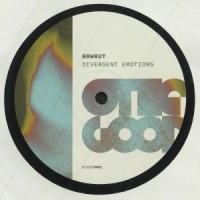 Divergent Emotions is the latest offering from Madrid-based Italian producer, Bawrut. Having put out a number of highly sought-after EPs over the last four years, Bawrut’s knack for crafting serious dance floor weapons has earned him scores of dedicated fans. Last year’s Pronto Arpeggio became a firm fixture in clubs around the world, cementing his reputation as a serious force to be reckoned with.

As the name would suggest, Divergent Emotions represents a full spectrum of sentiments across it’s three tracks. A product of the lockdown, these tracks were produced in the full knowledge that they will be experienced first and foremost in people’s homes rather than at a club or a festival.

Opening track 'What Is Dance' is a manifesto for partying in an era of no clubs. Conjuring up a yearning nostalgia for late nights and shared experiences on the dance floor. A four to the floor no-nonsense banger, coupled with a lyrical statement of intent for what dancing represents in these times we’re in.

'Sunlight' on the other hand is pure 6AM brightness, with the sun coming up, and the rave still very much in full swing. It’s the perfect pick me-up for a festival crowd seeing the first glimpse of the morning rays streaking in the side of the tent, wanting to keep on dancing.

The closing track 'AndreW' is an ode to the late Andrew Weatherall, a long time supporter of Bawrut’s. It’s a chugging behemoth of a track, overlaid with melancholy synth lines that echo both the huge loss felt after his passing earlier in the year, as well as the emotions experienced during the weirder parts of the lockdown.

Divergent Emotions is the first release from new London based label Other Goodness.