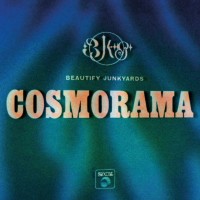 The fourth album for the Lisbon based band and their second on Ghost Box following on from The Invisible World of Beautify Junkyards in 2018. Cosmorama is a beautifully crafted and lavishly produced adventure into tropicalia tinged psychedelic dream pop. A hallucinogenic fusion of Os Mutantes and Broadcast. The eleven songs here are instantly rewarding and transportive, but the rich production rewards the listener with new detail on every repeated play. Its music that’s knowingly informed by Portuguese and Brazilian vocal traditions, with gauzy layers of male and female voices moving beguilingly amongst each other, shifting, dreamlike, between languages. This is set against an electroacoustic backdrop of complex percussion, masterly acoustic musicianship and a matrix of haunted electronics that makes this album perfectly at home in the world of Ghost Box records.

The Band: Beautify Junkyards are a very talented group of multi-instrumentalists headed up by João Branco Kyron on vocals and keyboards, Helena Espvall (formerly of Espers) on cello, flute and electric guitar, João Moreira on acoustic guitar and keyboards, Sergue Ra on bass and Antonio Watts on drums and percussion. Newest member, Martinez was recruited just in time to contribute vocals on Garden by the Sea. Joining the band as writing and performing collaborators on Cosmorama are: Nina Miranda (of Smoke City fame) on vocals on the title track and on Reverie and Parangolé, Alison Bryce of NYC’s Lake Ruth on vocals on Deep Green and classical & contemporary harpist Eduardo Raon on A Garden by the Sea and The Fountain.

Barry says: I know, I know, it's Ghost Box. We know it's going to be amazing but WHAT SORT of amazing? This particular one is hazy psychedelic montage in a film amazing, if you liked the Hintermass LP a few years ago (if not, why not?) then it's THAT amazing. Hazy, psychedelic folk mixed with tropical percussion and flickering synths all over.