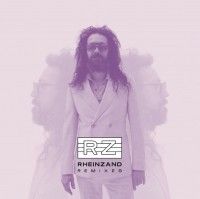 Hot off the press and totally XXXclusive to Piccadilly, we get a MASSIVE (figurately, it is spatially the regulation 12") EP companion to Rheinzand's album of the year! Music For Dreams (with a little help from our very own Mine) sequence a quartet of killer interpretations from Hardway Bros, Red Axes, In Flagranti and Richard Sen. I'll see you on the dancefloor!

Kicking the set off with his 'Hardway Bros Stereo Odyssey’, acid house veteran and disco devotee Sean Johnston filters the theatrical sheen of 'Obey' through glitchy techno beats in something like a cyborg re-assemblage. Pure Terminator funk with a whomping bassline and maximum tension. The tempo spikes on the A2 as Tel Aviv's kings of witching hour techno reshape "Kills & Kisses" into a ritualistic romper marked by vocal chants, eerie percussion idents and a pulsing electrodisco bassline. Sitting somewhere between Perel's 'Pastarella Al Limoncello' and Dozzy and Caragnano's "Parola", this moody post peak number offers occasional breaks in the cloud via a subtly celestial synth part.

Moving to the B-side we find nu-disco mavericks and pawn shop heroes In Flagranti turning up the wonk with a dark and sticky remix of "You Don't Know Me", stretching the arrangement for that 6AM looseness then letting rip with distorted synth washes and the smoke machine atmosphere. Play this into Joakim's mix of "Elle Et Moi" and you're onto a winner. Finally that Bronx Dog, Richard Sen breaks out the padded cell and swtiches "Strange World" into freak mode, straightening the track out to a grizzly drum box and supplementing the disco strings of the original with glassy DX7 bells and an acid house sequence.

Four of Rheinzand's finest, freshly reworked for the DJs and dancers.