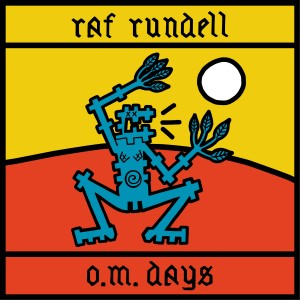 Last seen a couple of years back on his debut long-player Stop Lying, Raf has today also shared Ample Change (feat. Lias Saoudi), the second track to be taken off the album following Monsterpiece on which he roped in the legendary Chas Jankel to provide his distinctive touch.

Featuring on the cover a striking Keith Haring meets the Green Man image from acclaimed artist and long-time collaborator Ben Edge, the picture was inspired by the folk tale of the giant of Dawson, who is both male & female, human and vegetation and lived in the imagination of Dawson’s Hill, a stretch of South London parkland a stones throw away from Dawson’s Heights, the flats featured on the cover of Raf’s debut Stop Lying.

Edge and Rundell, for reasons they can’t entirely comprehend, concocted a rite which took place the first full moon after this year’s summer solstice (the results of which can be seen in the short film trailer for the album). This involved the giant – also known as Tommy Hill Figure - being created on Dawson’s Hill. “Ben’s been digging deeper and deeper into ancient myths, the green man, all the stuff that’s been co-opted by organised religion,” Rundell explains. All this chimed with him because he is a magnet for signs and symbols. He has been ever since his Mod-loving parents named him after the RAF roundel symbol.

“We’d been talking about this sort of stuff a lot,” Rundell continues. “The rite was about the birth of the new and using the coronavirus as a catalyst for that change, like a full stop to the way things were before. The corona was called the spark in the ceremony, although we’re not being too specific about the virus because this is a thing we hope to do annually.”

This is the backdrop to the album, a record far larger and more confident than its creator could ever have imagined. Unlike his itinerantly created previous records, O.M. Days was entirely recorded in the same Forest Hill studio, with the aforementioned collaborators. “I love collaborating with people – like Lias Saoudi or Andy Jenkins, who are both on this record – that’s where it’s at for me,” Rundell says. “I worked really hard on this one. And although I had no plan about where it was going, I always have a notion about how I want things to sound. I had a particular idea about that.”

Barry says: There's always a considerable amount of rhythmic shuffling when Rundell comes on the stereo (I would obviously dance but am pretty terrible at it, so results in said shuffle). 'O. M. Days' has all of the latent melodicism we've come to expect from Rundell, but with an uplifting, post-pandemic groove sure to get the newly opened clubs moving It's a brilliantly produced and intensely enjoyable listen.