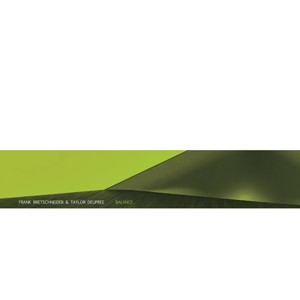 The album 'Balance' by Frank Bretschneider & Taylor Deupree was originally released in 2002 by Mille Plateaux on CD only. The 9 tracks on 'Balance' are a perfect example for the aesthetics to arise within the Click & Cuts scene and (ambient-)glitch music movement of the late 90s and early 2000s.
The two masters of microscopic sounds and sine wave/white noise-based music constructed these seamlessly mixed pieces around rhythms and melodies, which grants the album plenty of dynamics. The wide variety of carefully chosen ambient sounds throughout the whole work endows 'Balance' warmth and intimacy.

The recordings are now available for the first time on vinyl within the KeplarRev series, presented in a new updated artwork based on the original layout with photographs by Taylor Deupree.

Matt says: This is rather special. A stunning example of the dizzying heights the glitch-ambient-microhouse genre reached as the dawn of a new millenium set in. Criminally it never saw a vinyl release, making this somewhat of a coup for Keplar who have acquired the rights to press it up on wax. If you've a penchant for the kinda horizontal and sedentary electronica purveyed by Pole, Pub, Burnt Friedman & Jan Jelinek etc; then this is a tour de force of intricacies and curios; a long lost coffee table / comedown epic available for the FIRST TIME on vinyl!