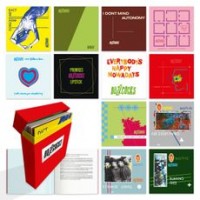 Remastered from the original tapes and in the original Malcolm Garrett designed sleeves, the box also contains a 36-page booklet written by acclaimed author and punk chronicler Clinton Heylin.

A thrilling run of singles, primarily written by Pete Shelley & Steve Diggle, which showcased their effortless ability to write three-minute-minimasterpieces that would endure long after the initial spark of punk had faded, many of these tracks were compiled and released on the album Singles Going Steady, a record which came out in the U.K. in November 1981 and quickly transcended its status as a mere compilation going on to become regarded as a seminal and era– defining release.

Single 1
Orgasm Addict
What Ever Happened To?
Single 2
What Do I Get?
Oh Shit!
Single 3
I Don’t Mind
Autonomy
Single 4
Love You More
Noise Annoys
Single 5
Ever Fallen In Love (With
Someone You Shouldn’t’ve?)
Just Lust
Single 6
Promises
Lipstick
Single 7
Everybody’s Happy Nowadays
Why Can’t I Touch It?
Single 8
Harmony In My Head
Something’s Gone Wrong Again
Single 9
You Say You Don’t Love Me
Raison D’Etre
Single 10
Are Everything
Why She’s A Girl From The
Chainstore
Single 11
Strange Thing
Airwaves Dream
Single 12
Running Free
What Do You