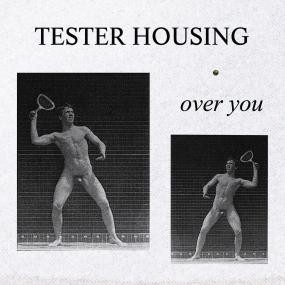 Tester Housing was the short-lived band consisting of mates Bill Tolson and Ken Olver. The duo met during the early 1980s in the burgeoning Southside of Melbourne, St Kilda. Pitched along the bayside, St Kilda at the time was full of artists, painters, writers, poets and musicians. The suburb was the type of place where dwellers wore their hearts on their sleeves; the sort to be found sharing a jug at the pub after a fist fight. The St Kilda music scene during the late ‘70s and ‘80s was infamous, breeding bands such as the Primitive Calculators and The Boys Next Door.

Despite Tester Housing producing a modest handful of recordings, both were actively present in the St Kilda chaos. Bill established Prahran’s Greville Records in 1978 and later founded the prolific Rampant Releases in 1982, pressing the likes of Not Drowning, Waving and David Chesworth. The duo also played together in the new-wave group Gilded Youth, before joining forces and forming Tester Housing.

When asked about their reasoning for the bands short stint, they wink and answer “just say something interesting such as drugs and ego got in the way and after we both had a knife fight on St Kilda pier one night and we both decided to go into rehab for the next twenty years. Or alternatively, we just knew that if we continued to play music together we would become too rich and boring.”

To commemorate Testing Housing’s legacy Left Ear Records present Over You, a 12” of the bands two 1983 singles, The Clock Ticks Over and Into You with their counterparts, a dub version and a stripped back almost acapella. Their sound channels both that of the gritty Southside and the experimental Northside scenes to create youthful and enchanting synth-pop. Both arrangements are laced with themes of love, redemption and acceptance in a unique and compelling way.