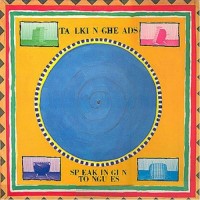 Limited Edition Sky Blue vinyl of the band’s 1983 album. Featuring the US top ten hit, “Burning Down The House”. It was met with widespread critical acclaim with Pitchfork awarding it a score of 85, and Rolling Stone’s David Fricke stating that the album is ‘the album that finally obliterates the thin line separating arty white pop music and deep black funk.