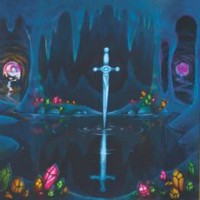 ‘Spells’ is the ethereal and enchanting debut release by Los Angeles harpist and composer Nailah Hunter.

Each of the tracks offer tranquillity and a reflective setting. The release started off with Hunter wanting to reclaim the way she thought about creating and performing music.

Hunter says each of the eight tracks on the release represents a spell, allowing her to carry them out as steps of a ritual: “Each track is its own incantation, its own spell, its own world.” Ambient in nature, ‘Spells’ brings out Hunter’s intuitive skills as a composer.

All instrumentation on ‘Spells’ was composed, played, recorded and produced by Hunter, who is best known for creating ethereal music with the harp. She is part of Leaving Records supergroup Galdre Visions alongside Green-House, Ami Dang and Yialmelic Frequencies The project was recently featured in the New York Times.