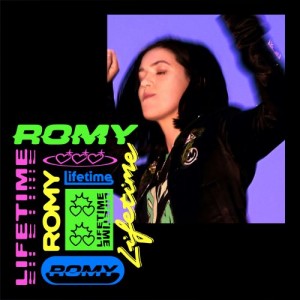 JFC. Last week Matt Ward accused someone (in the shop, not the generalised 'Man') of spiking the Piccadilly brews with one or more narcotics. Naturally we all laughed him out of the shop. But now, as I sit slack jawed and lost to the most profound déjà vu, I'm starting to believe the Kicking Pidge is in fact a pit canary. I walked into work as an out of shape, mildly out of touch 30-something - I still find friends funnier than I do unacceptable and haven't yet given up on Gervais - but now, as the sounds of this Romy 12" rattle through my ear drums, I'm young again, living out a Uni-era euphoria of Mkat and Mad Ferret.

Things are the same but different. Romy XX is on an indie label, her voice as pristene as ever, but now the line up of remixers represents the more balanced face of the industry, each one female or non binary and selected by Romy herself. Though the POV may be different, the purpose is the same, retool an indie OG for the various dance subsets out there. Jayda G takes the tech-house approach, taking the Innervisions approach of jazzy keys and moody bass whomps, while Planningtorock's "Let It Happen" remix is as close to electroclash as anyone dares to get in 2k21.Though the instrumentation may stray a little too close to Whitey's "Leave Them All Behind" the adventurous use of vocal pitch shift more than makes up for it. Kicking off the flip HAAi's in some sort of MBV meets EDM fever dream, translating the OG into a euphoric call back to Skream's "In For The Kill" remix (on a side note, the isolated vocal in the breakdown here has a distinctly Appalachian flavour - country EDM 2.0?) before local shero Anz pairs breaks and bass oomph with some rather sophisticated keys.

Four mixes for four different sets and one neat A Capella to show off those vocals in splendid self isolation.